Directions to the Sugar Shack 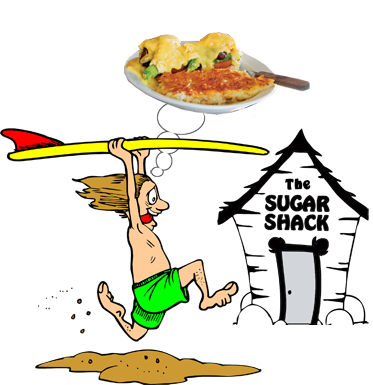 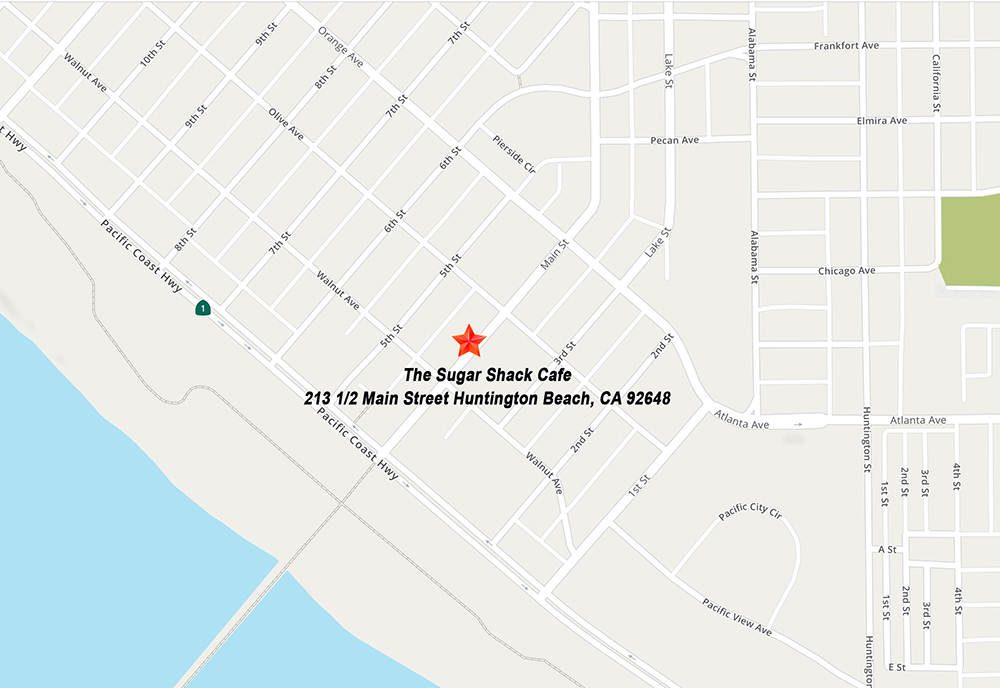 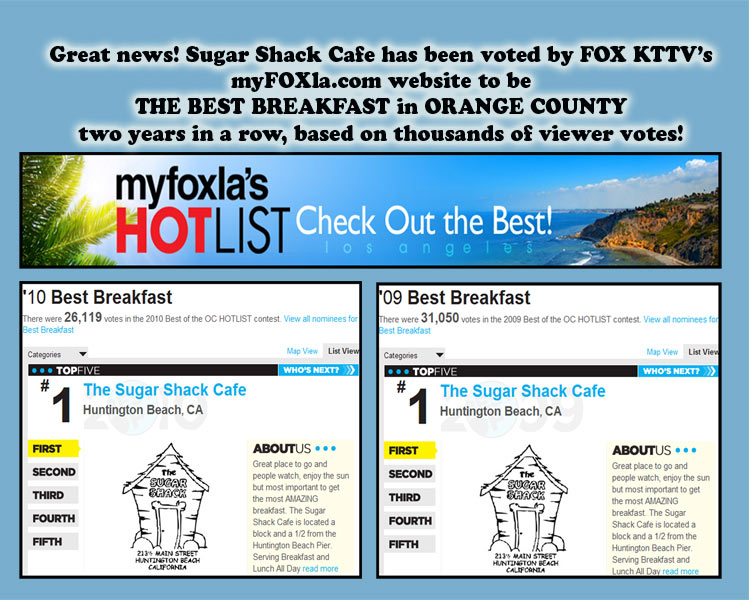 The Sugar Shack Cafe was established in 1967 at 213 Main Street, the same location where it sits at today.

The Sugar Shack was established by Pat and Mary Williams. The Williams were long time Huntington Beach residents, with four daughters and one son.

One day they were walking down Main Street and saw a for sale sign on a small cafe. Mary thought to herself - this will be the perfect place for my children to learn the value of money and how to work hard. They bought the restaurant and raised their children working there.

The cafe sat 22 people and had only inside dining. In 1979 The Williams decided they wanted to sell the business and move out of town. They offered it to their children. All of them turned it down except for Michele Turner (Williams second born) and her husband Tim Turner. The rest is history.

Michele Turner has always worked behind the counter taking orders and making sure everyone is happy. Michele has been know as the "Mother Theresa" of Main Street as she is always there to help out someone down on their luck, or just there an open ear and an open heart.

Michele and Tim Turner have 3 grown children, Holly, Ryan and Timmy that help run the business now. These young adults also wait tables and help out with the day to day operations.

Many regulars come to The Sugar Shack everyday, sometimes twice a day because they feel at home. They say that it is their kitchen too, where good friends meet and eat!

Breakfast sandwich: Get your day started with an egg, bacon, tomato and cheese sandwich served on rye toast and a bowl of fruit at the Sugar Shack.

What's on the menu: The Shack is primarily a breakfast and lunch place, with any kind of wake-you-up egg dish you have a craving for and possibly the best burgers in Huntington Beach. You will find every manner of sandwich here prepared exactly as you like it.

On Wednesdays, this downtown favorite makes an exception and stays open for dinner, serving its special "Turkey and all the Fixin's." There is a special lunch meal every day, and it is the biggest bargain on Main.

Recommendations:My favorite breakfast here is an egg, bacon, tomato and cheese sandwich served on rye toast. For lunch I like the tuna sandwich and with anything here, a bowl of fresh fruit is just right.

Go early and eat outside if it's sunny or for the real Sugar Shack experience, sit at the counter inside.

What makes this place different:Michele Turner and her family have been operating the landmark eatery since 1967, and they really care about every customer. Michele gets to the kitchen before the sun rises and starts preparing the daily special. If you need a cup of coffee before anything else is open, chances are that her cooks and she will be there.

You will usually see the same wait staff here year after year. Teens start working at the Sugar Shack part-time in high school and stay until they are bringing their children in for Michele to spoil.

Of all the breakfast places in downtown Huntington Beach, Sugar Shack is probably the It has been family-owned since 1967, and Michelle Turner has kept the little café thriving with her deep association with the surfers. One publication once wrote, “There is a tradition in Huntington Beach that says that no one is a true surfer unless they have been to the Sugar Shack.”

The restaurant is next to two other places that serve breakfast, but on any day, even though the other places might have tables outside, people will wait until one becomes available at the Sugar Shack.

It is worth the wait.The food is simple yet flavorful, and there are a few surprises on the menu that shouldn’t be missed.

One of those is the surf, which is half coffee and half hot chocolate. It is a great way to spruce up a regular cup of coffee, and the whipped cream on top tasted like it was homemade.

Another is the cinnamon roll. The roll is not too sweet, which I like. It comes out warm and is not slathered in icing, so the amount of guilt is lessened when ordering it.

Though my guest was partial to the omelets, I usually look at the specials. The Michelle’s Special with grilled chicken breast, three egg whites scrambled with bell peppers, tomatoes and fruit is a fairly healthy way to start the morning, but I usually lean toward the breakfast special or the Keppler’s.

The breakfast special has two pancakes and an egg — though I swear, when scrambled, it looks like two — bacon or sausage. I like the bacon over the sausage. The sausage seems a little too cooked for my liking.

The Keppler’s is a delight, though. The three eggs scrambled on an English muffin with sliced avocado, tomato, bacon and hollandaise sauce is quite good. I like the hollandaise sauce, which is a little smoother than others I have tried.

My recent favorite special is the HSS. This is a grilled ham sandwich on sourdough bread with melted cheddar cheese and scrambled eggs.

One of the features of the restaurant that I really enjoy is that they don’t care if you alter your order. So I had American cheese instead of cheddar and asked for grilled onions. It made an already good sandwich even better. I am still trying to figure out how the scrambled eggs stay in the bread while you are eating it. I also liked the home-style spuds that are served with it. They are thin slices of potatoes deep fried and come out like chips. They were much more enjoyable than the hash browns.

The are 11 omelets, including the Main Street, which has avocado, mushrooms, onions, sprouts and cheese. The Popeye and cheese is a solid spinach omelet, and one I find interesting is the chili and cheese omelet.

The breakfast burritos are a meal in themselves but a bit pricey, with most of them nearly $8. Plus, if you want to add anything, from sour cream to mushrooms to avocado, it costs more.

It is lightly battered, and there are ample amounts of powered sugar on top and butter on the side. It was so good, I didn’t even need the syrup.

The patio fills up quickly, so a more relaxing option might be inside or in the back. Whenever I sit out front, I feel like I am being leered at by the people who are waiting for my table. I don’t blame them. With food this good, I would want to get to it as quickly as possible as well.

A block from the waves in Huntington Beach, surfers fill up on breakfast burritos and camaraderie.

On Tuesday and Thursday mornings at the Sugar Shack in Huntington Beach, 40 miles down the coast from LA, you're likely to find the Huntington Beach High School surfing team digging into post-practice breakfast burritos and French toast on the house. Since the days when her sons, Timmy and Ryan, were team captains, the restaurant's owner, Michele Turner, has "sponsored" young surfers, replenishing the calories they burn on the waves. 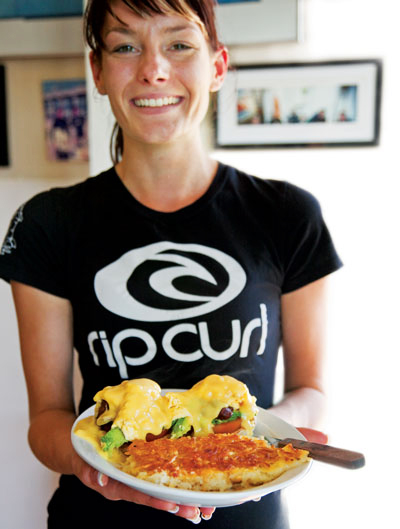 The old-fashioned breakfast and lunch spot on the main drag of this self-styled Surf City takes its name from a 1963 song by Jimmy Gilmer and the Fireballs ("There's a crazy little shack beyond the tracks/And everybody calls it the Sugar Shack"). Its walls are covered in memories: pieces of boards, clippings from surfing magazines, competition medals, obituaries of local kids who died in the waves, portraits of others who have worked at the restaurant.

Turner feeds nonsurfers too, many of them regulars. "One guy, Mel, has come in twice a day since we opened, in 1967," she says. "He eats half a bowl of oatmeal with raisins on the side, then a chicken sandwich for lunch."


But it's not just the homemade vegetable beef soup, Wednesday's turkey platters, or the popular Keppler's Special—a breakfast dish of scrambled eggs, bacon, tomato, avocado, and hollandaise on an English muffin named for the surfing photographer John Keppler—that lure folks to the Sugar Shack. It's the camaraderie. "You get filled up on food," says the surfing team coach, Andy Verdone, "and you get filled up on surfing gossip. Every surfer, from the world champion Kelly Slater to the little grom [young surfer] who's just starting out, has had a meal at the Shack."

Eric Ramsey was one of those groms when he started working here at the age of 15. Now, like the owner's sons—both professional surfers who don waiter's aprons at the restaurant when they're not chasing waves in Indonesia or Iceland—Ramsey, 21 and a pro himself, takes part of every year off to travel and surf. When he's home serving omelettes at the Sugar Shack, he always greets customers with the same question: "Any waves this morning?" 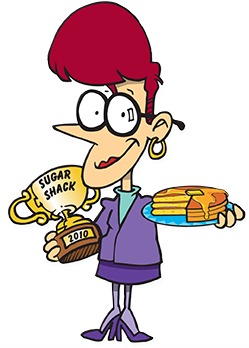 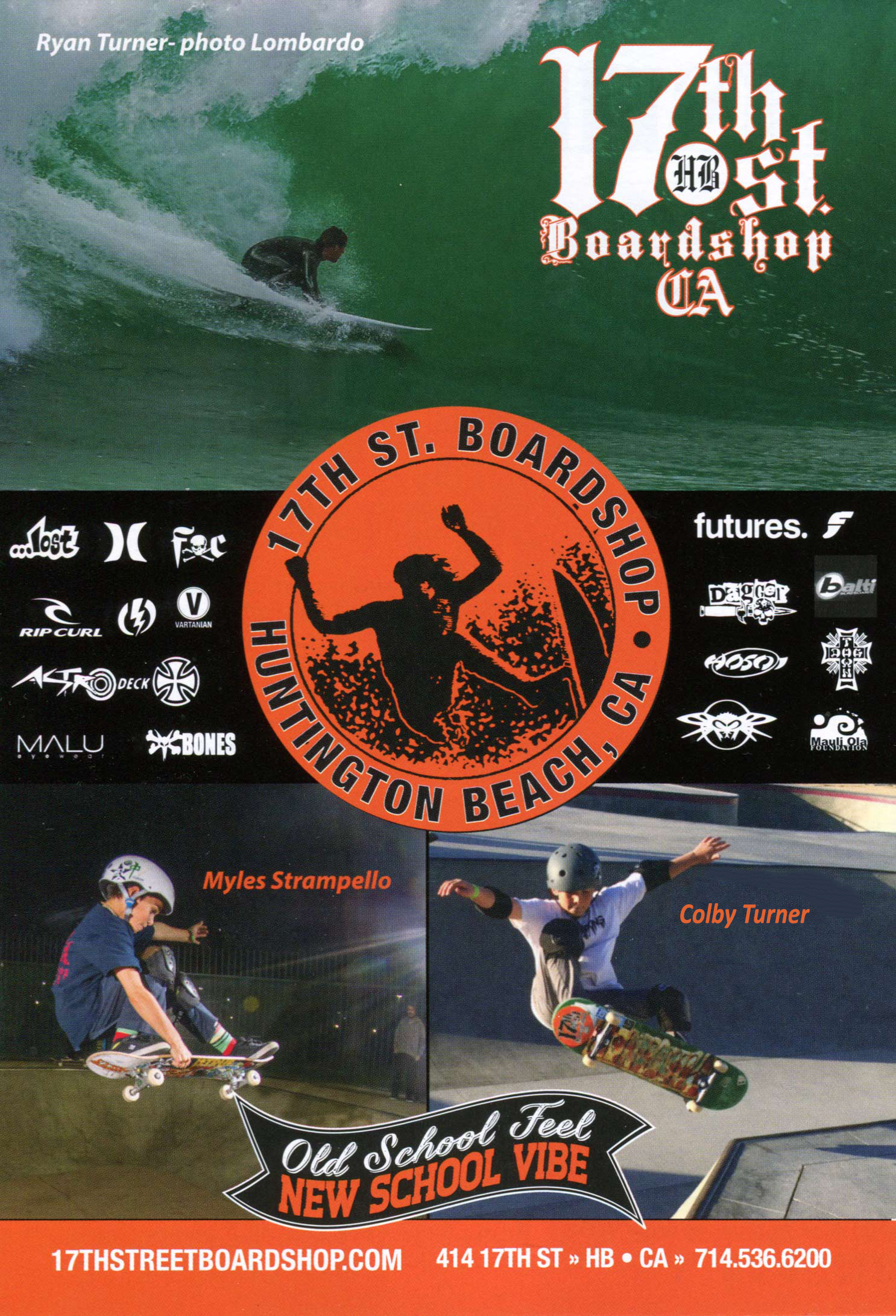 Rayn and Timmy Hall of Fame 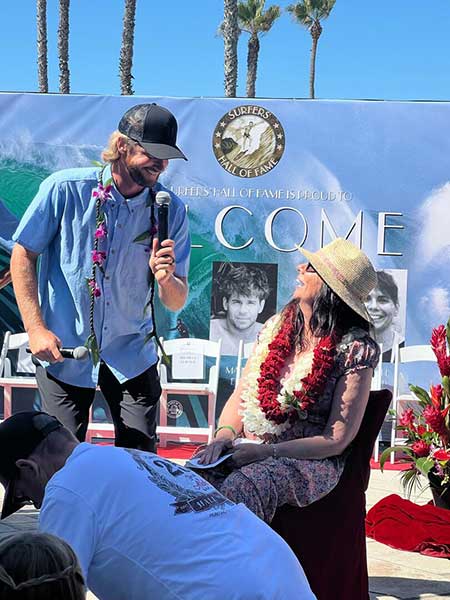 The Sugar Shack Café on Main Street in Huntington Beach was closed all day Friday.

For a Friday during the U.S. Open of Surfing, this would normally be unthinkable. In this case, the reason for the closure was pretty great.

A stone’s throw from the much-loved restaurant, owner Michele Turner — known as the “Surf Mother of Main Street” — was being inducted into the Surfers’ Hall of Fame in front of Huntington Surf & Sport. 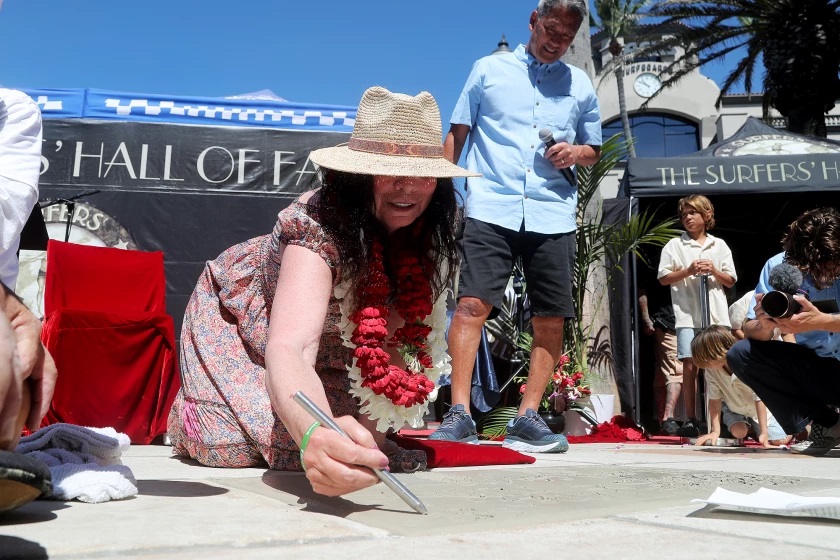 During his remarks, Simpson called the Sugar Shack the most popular restaurant in Surf City. It’s a favorite breakfast spot for many locals, as well as surfers who are passing through.

“That’s what we’re supposed to do,” Turner said when asked about serving the community over the years. “That’s the plan. If everybody did that, we would be [in a better place].”

The words she wrote in the cement? “Always be humble, kind and giving.”

“It’s a big city, but this area is a small community,” she said. “We all take care of each other.” 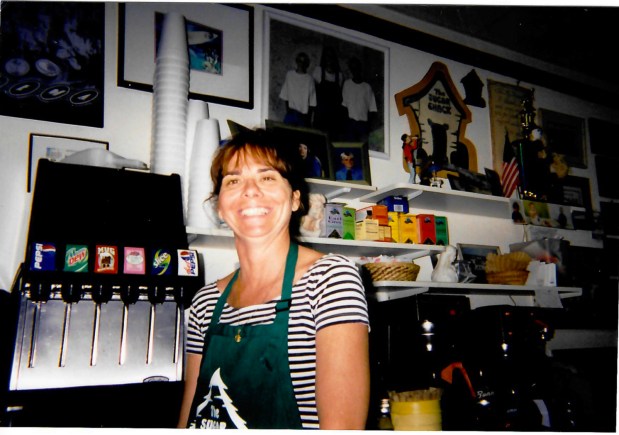 Turner, who took over restaurant operations for her parents more than four decades ago, was joined Friday by her three children — Ryan, Timmy and Holly — and all 11 grandchildren. Ryan and Timmy developed into standout pro surfers themselves, and both are in the Surfers’ Hall of Fame themselves. 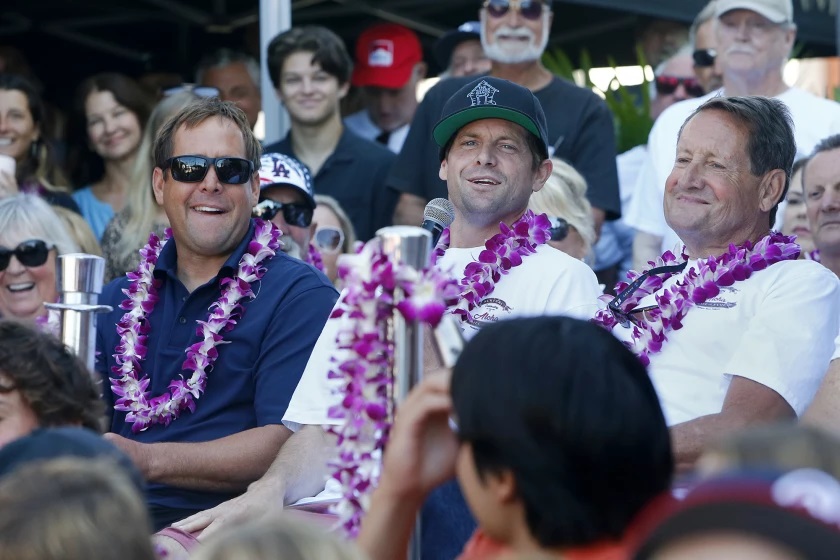 “She’s so well-deserving,” Ryan Turner said. “I’m proud of her and so happy to be her son. She’s just an awesome person. She always taught everything will always come back, to give. It all comes back to you, man. Me and my brother work there now, and I can’t tell you how many times I hear stories about what she has done for other people.”

The food, of course, is a big reason why the Sugar Shack has such devoted fans. It has been family-owned since 1967.

Pro surfer Corky Carroll, who has a long-running surf school in Huntington Beach, might have summed it up best.

“Who in this town doesn’t love Michele Turner?” Carroll said. “So many days I come out of the water freezing cold, and I’ve got to get a cup of coffee and some of Michele’s pancakes.

“She got this going,” he said, rubbing his tummy, to laughs from the audience. “It’s her fault. Bacon and eggs and pancakes.”

The Sugar Shack Cafe website endeavors to provide digital accessibility for people with disabilities. We are continually improving the user experience for everyone, and applying the relevant accessibility standards.

We have provided Visibility Controls on the site that can be opened and closed. These controls allow the user to change background color, font size and highlight clickable links. These features can also be easily reset by the user.

This site has been built using code compliant with W3C standards for HTML and CSS. The site displays correctly in current browsers using modern responsive design techniques and standards compliant HTML/CSS code.
We will continue our efforts to enhance the user experience with priority to the disabled.